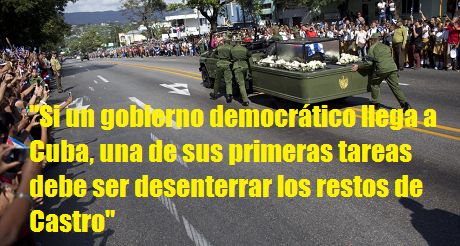 "Julio Shiling, who runs Patria de Martí, or Fatherland of Martí, a Miami-based organization that promotes democracy in Cuba, said that if a democratic government comes to Cuba one of its first tasks should be to disinter Mr. Castro’s remains."

“Castroism is the antithesis of everything Martí stood for,” he said.

HAVANA, Cuba—Fidel Castro, the idealistic revolutionary turned communist dictator who ruled Cuba for nearly half a century, was buried Sunday in the eastern city of Santiago de Cuba, where he and a band of rebels touched off a revolution that reverberated across the world.

It was the closing spectacle for a firebrand beloved or loathed by millions for installing a socialist state 90 miles off Florida, fomenting revolution in Latin America and aligning Cuba with the Soviet Union to challenge the U.S.

A green military jeep pulled a trailer carrying his cremated ashes from Antonio Maceo Plaza, where a vigil had been held the night before, to the Santa Ifigenia cemetery in the last stage of a funeral cortege that had begun Wednesday in Havana. The strongman now rests in a crypt in the same cemetery that holds the remains of comrades killed in his 1950s-era guerrilla war against the dictator Fulgencio Batista, which began in the 1953 assault on the Moncada barracks in Santiago.

A 21-gun salute was fired in Mr. Castro’s honor. The burial itself was small and intimate, said to be for close family and confidants. But it capped off a carefully orchestrated send-off called “the Duelo Nacional,” or National Mourning, that ran over nine days since the Maximum Leader’s death in Havana on Nov. 25 at age 90.

The omnipresent message from the government, headed since 2006 by Mr. Castro’s younger brother, Raúl, was continuity in Cuba’s system and vigilance against enemies.

“We vow to defend the homeland and socialism,” Raúl Castro, in full military uniform, said before thousands of Cubans Saturday night in Santiago. “Whoever tried to take over Cuba will collect the dust of its soil flooded with blood if he doesn’t die first.”

The country that Mr. Castro leaves behind is a broken one. Its economy is in a slow-motion collapse, unable to grow the food Cuba needs, condemning most of its 11 million people to a life of penury.

In a nation with no free press or opposition groups, they have been told only that the system the revolutionaries had put in place here would provide everything, from education to health care. Unquestioned loyalty was what the Castros expected in return. Thousands who spurn the bargain take to the Caribbean each year hoping to reach Florida.

In several interviews, Cubans in three regions of the country openly spoke about their discontent.

“I want to practice my profession, but you can’t in Cuba,” said Ariana Llera a 28-year-old who trained as a psychologist but who does odd jobs. “If I stay in Cuba, I know what’s in store for me,” she added, saying she instead hoped to find a way to get to Miami.

Ibrahim Aldezabal, 47, had worked all his life for the state but makes the equivalent of $10 a month. Even with government food rations—a pound of meat and 5 pounds of rice monthly, plus sugar, cooking oil and other essentials—there’s not enough to eat, he said.

“There’s hunger,” he explained. “I grew up in the revolution, but the reality is that my life has not gone very well.”

Those kinds of reflections are never welcome in a police state, but less so during the mourning period for a man who ruled for decades.

And this past week, apparently nothing was left to chance when it came to Mr. Castro’s send-off: Cuba’s pulsating nightlife was shut down, and the state security services have been out in force. Placards bearing Mr. Castro’s bearded face appeared nationwide; flags draped public buildings. State television’s turgid programming ran grainy black-and-white footage of Mr. Castro giving speeches or mingling with crowds.

Irene González-Miranda, 44, who like thousands lined the street this week to send-off El Comandante, said she felt grateful. “We are taught to see him as Papa Fidel, so this hurts, really hurts,” she said.

After a final farewell early in the week at Havana’s Revolutionary Square, the former president’s remains, placed in a small, glass-encased casket, began moving east in a cross-country cortege through towns, cities and listless countryside. The state called it “The Caravan of Liberty,” the same name the guerrillas called the journey they made from Santiago to Havana to topple the Batista regime in 1959.

It didn’t all go well despite the state’s attention to details: at one point, soldiers were forced to push the jeep towing the remains when it broke down, fitting for a country where vehicles creak along.

But mourners along the route across Cuba, waving their country’s flag, shouted, “I am Fidel” and cried before state TV cameras.

Among those who waited hours was Ramón Ojeda, a pig farmer from central Cuba. “He gave something to everyone, to some more, to some less, but everyone benefited,” Mr. Ojeda said.

The burial took place in the same cemetery that holds the remains of José Martí, the 19th Century independence hero who is both a guiding light for Mr. Castro’s supporters and the 2 million-strong Cuban diaspora outside of the island that opposes the dictatorship. It was a final insult for many of those in Miami, where 1.1 million Cuban immigrants live.

Julio Schiling, who runs Patria de Martí, or Fatherland of Martí, a Miami-based organization that promotes democracy in Cuba, said that if a democratic government comes to Cuba one of its first tasks should be to disinter Mr. Castro’s remains.

“Castroism is the antithesis of everything Martí stood for,” he said.

While most in Santiago displayed affinity for the dead revolutionary, there was dissent.

One 28-year-old man, who manages a privately run cafeteria, said he has tried to make it by sea to Miami, failing on four occasions. Asking that his name not be used, he said, “I felt nothing” when Mr. Castro died. He instead wanted to think of the future.

“We can’t live on memories because whoever lives on their illusions will die disappointed,” he said. “You need to look ahead.”