AEI Report: Time for US leadership in the Americas 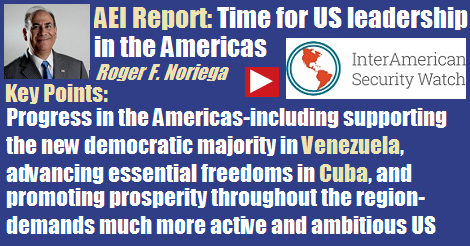 In 2016, the United States has the opportunity to advance key US interests in the Americas—eclipsing the failed and fading legacy of the late Venezuelan leader Hugo Chávez, filling the void that China’s receding demand created, and backing a trend toward accountable policies. Predictably, President Barack Obama’s outreach to the Raúl Castro regime in Cuba has failed to produce the results that he hoped would leave a lasting legacy.[1] However, he has one final year to make a meaningful contribution to democracy, the rule of law, and free-market economics in the Americas as a whole.

For nearly two decades, several countries have succumbed to a mix of authoritarian populism, statist economic policies, and unsustainable social spending—giving government such an overbearing role in national economies that it spurred corruption and undermined democracy. Regrettably, in the last decade, the United States failed to advance any alternatives to big-government strategies.

Meanwhile, regional antidrug cooperation that willing Andean neighbors forged with the United States 25 years ago has virtually disintegrated today.[2] At first, leftist regimes in Bolivia, Ecuador, and Venezuela defied this US-led agenda. Eventually, several became complicit with narcocorruption—with little or no pushback from US policymakers.[3] Now, Colombia’s government is gutting key antidrug policies in its rush to make peace with narcoguerrillas, but US diplomats have failed to counsel against making peace at any price.[4] Transnational organized crime destabilizes a half-dozen countries, but the Obama administration plans to throw US tax dollars at the symptoms in Central America while neglecting the narcostate in Venezuela.

In a number of countries in recent months, elections and opinion polls suggest that people are seeking alternatives to statist formulas that have produced political repression, economic recession, or both.[5] President Obama has the opportunity to salvage the final year of his mandate by empowering his diplomatic and economic team to demonstrate US leadership in key areas:

Show that the United States cares about its neighbors. Energize outreach to like-minded governments, civil society, and the private sector, and speak out on a host of practical and pressing issues—including fighting corruption in Central America, promoting political accountability and practical economic solutions in Haiti, and rallying solidarity with the region’s democrats, beginning in Venezuela and Cuba. Lead with free-market solutions. The secretary of the treasury should form a regional working group of finance ministers to develop a prosperity agenda for aggregating and channeling private capital and international assistance to private-sector entrepreneurs, liberalizing internal markets, modernizing infrastructure, maximizing energy production, and tapping the benefits of international trade. Help rescue Venezuela and support the new democratic majority. Call for an urgent meeting of foreign ministers at the Organization of American States under the Inter-American Democratic Charter to respond to the Nicolás Maduro regime’s attempts to deny the democratic opposition the National Assembly supermajority it won on December 6. Put narcotraffickers and other transnational criminals on the defensive. Use executive authorities to sanction individuals (denying access to the US financial system and freezing assets) who play a disproportionate role in undermining democracy and the rule of law. Promote principled peace in Colombia. Encourage the Colombian government to negotiate a tough, enforceable agreement with the guerrillas, such as Fuerzas Armadas Revolucionarias de Colombia (FARC); fortify the agreement with a constitutional referendum; and restore effective extradition and coca-eradication programs if the FARC fails to cease drug-related crimes. Support the right of the Cuban people to choose their own future. Reprioritize their human rights, democracy, and economic liberty in compliance with the bipartisan Cuban Liberty and Democratic Solidarity (LIBERTAD) Act of 1996. Challenge the Castro regime for meddling in Venezuelan affairs. Filling the Vacuum of Responsible Leadership

President Obama and Secretary of State John Kerry clearly come from a school of thought that sees Latin America and the Caribbean as a bundle of grievances against US interference. When, in November 2013 at the Organization of American States (OAS), Kerry declared, “The era of the Monroe Doctrine is over,” he might have admitted that the Obama administration’s policy is to leave the Americas alone, literally.[6] Dutiful career US diplomats have fashioned a policy of benign reticence—self-conscious silence as leftist caudillos (strongmen) dismantled democratic institutions, muzzled independent media, and jailed political opponents; as unsustainable social programs and corruption smothered burgeoning economies; and as China muscled its way into a natural US market with mercantile tactics and predatory loans.[7]

Minding these matters is the United States’ business.

It is a fallacy that Latin America regards any sort of engagement by Washington as unhealthy intervention. The truth is the United States can work with like-minded democrats to reenergize the Inter-American Democratic Charter—starting with reviewing the conditions of democracy, human rights, and the separation of powers in Venezuela. Luis Almagro, the new OAS secretary general, deserves the strong backing of the United States and other democratic governments, so the OAS can reassert its role in detecting and responding to threats to democracy and human rights.[8]

There is dramatic evidence that people in many countries need and welcome their neighbors’ renewed solidarity. In Guatemala, a political neophyte, Jimmy Morales, was elected president in October with two-thirds of the popular vote. His election came after months of peaceful popular protests, which forced President Otto Pérez Molina (and his vice president) to resign in the face of corruption charges uncovered by a prosecutor backed up by a UN-sanctioned (and US-backed) international investigative team.[9] Honduran President Juan Orlando Hernández has turned to the OAS for similar international assistance to ferret out corruption.[10]

In Haiti, the United States and the international community cannot merely provide aid while ignoring the feudal economic system, nor should they pay for periodic elections and then neglect political dysfunction. Once the current electoral impasse is resolved, the United States and other donors must press Haiti’s new president and parliament to govern responsibly and eliminate the culture of cronyism and corruption. Haitian leaders, in government and business, should be challenged to take practical steps to modernize the economy from the bottom up, emphasizing private initiatives that create decent jobs and give people a stake in the future. This requires transparent policies that encourage domestic and international investment.[11] As Haitians begin to identify responsible government with greater prosperity, their leaders can pursue the long-term goal of reforming the country’s political institutions to make them more accountable and relevant.

Poverty and insecurity in some Latin American and Caribbean countries are primarily caused by a lack of strong, accountable institutions that can foster economic development and provide for public security. For these valid reasons, the United States has been active for 80 years in promoting democracy and the rule of law in the Americas. In numerous countries in recent years—including Guatemala, Haiti, Argentina, and Brazil—people demonstrated their faith in these democratic solutions to the toughest problems. In each case, legislatures, courts, independent media, civil society, the rule of law, or free and fair elections have played indispensable, positive roles.

US foreign policy cannot be timid when these values and institutions are tested. Although some in the region complain about the appearance of US meddling, many have come to expect US solidarity with its neighbors in defense of shared principles.