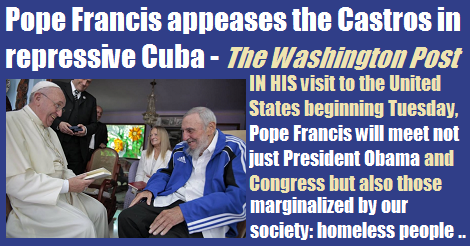 IN HIS visit to the United States beginning Tuesday, Pope Francis will meet not just President Obama and Congress but also those marginalized by our society: homeless people, immigrants, refugees and even the inmates of a jail. He’s expected to raise topics that many Americans will find challenging, such as his harsh critique of capitalism. His supporters say it’s all part of the role the pope has embraced as an advocate for the powerless, one that has earned him admiration from both Catholics and some outside the church.

How, then, to explain Pope Francis’s behavior in Cuba? The pope is spending four days in a country whose Communist dictatorship has remained unrelenting in its repression of free speech, political dissent and other human rights despite a warming of relations with the Vatican and the United States. Yet by the end of his third day, the pope had said or done absolutely nothing that might discomfit his official hosts.

Pope Francis met with 89-year-old Fidel Castro, who holds no office in Cuba, but not with any members of the dissident community — in or outside of prison. According to the Web site 14ymedio.com, two opposition activists were invited to greet the pope at Havana’s cathedral Sunday but were arrested on the way. Dozens of other dissidents were detained when they attempted to attend an open air Mass. They needn’t have bothered: The pope said nothing in his homily about their cause, or even political freedom more generally. Those hunting for a message had to settle for a cryptic declaration that “service is never ideological.”

Sadly, this appeasement of power is consistent with the Vatican’s approach to Cuba ever since Raúl Castro replaced his brother in 2006. Led by Cuban Cardinal Jaime Ortega, the church committed to a strategy of working with the regime in the hope of encouraging its gradual moderation. The results have been slight. Cardinal Ortega obtained Raúl Castro’s promise to release all political prisoners, but arrests have continued and dissident groups say the number of jailed is now above 70. One leading Christian dissident, Oswaldo Payá, was killed in a suspicious 2012 auto crash.

The Vatican’s greatest success has been the adoption of its strategy by the Obama administration, which has also restored relations with the Castros while excluding the political opposition. Here, too, there have been disappointing results. U.S. exports to Cuba, controlled by Havana, have declined this year, while arrests of opponents have increased, along with refu­gees. Many Cubans are trying to reach the United States ahead of what they fear will be a move by the Obama administration to placate the regime with a tightening of asylum rules.

Pope Francis may believe that merely by touring the country he will inspire Cubans to become more active and press the regime for change. But two previous papal visits, in 1998 and 2012, did not have that effect. By now it is clear that the Castros won’t be moved by quiet diplomacy or indirect hints. A direct campaign of words and acts, like that Pope Francis is planning for the United States, would surely have an impact. But then, it takes more fortitude to challenge a dictatorship than a democracy.