Several caveats to be aware of before doing business in Cuba

Several caveats to be aware of before doing business in Cuba 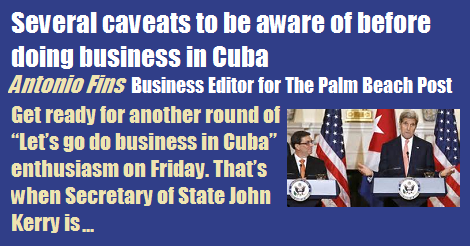 Get ready for another round of “Let’s go do business in Cuba” enthusiasm on Friday. That’s when Secretary of State John Kerry is scheduled to raise the Stars and Stripes for the ceremonial opening of the U.S. Embassy in Havana.

Before you go rushing into a business venture on the island that was the communist outpost in the Cold War, you might want to have a talk with Ross Thompson at Classified Worldwide Consulting, which has an office in West Palm Beach. Thompson, the firm’s managing director, has a few caveats to share.

In particular, Thompson cautions that Cuba’s foreign investment and business laws present six key challenges that Americans need to think through ahead of time. They are:

1. The Cuban government will own a majority stake in the company. A 49-51 percent split is common, but Havana has required a larger share in some sectors.

2. Your local workforce will be selected by the Cuban government. This selection may not be based on skill or merit but by seniority or cronyism.

3. Cuban managers will be appointed to mirror your handpicked managers, especially if your senior leadership includes Cuban exiles. The Cuban managers will ultimately control many decisions, or influence them, when dealing with your majority partner, the Cuban government.

4. Everything in Cuba is heavily influenced by Cuba’s intelligence service, the DGI. You must be very careful to guard your own corporate proprietary information.

5. Vendors you may work with may be fronts, or “cutouts,” for other foreign intelligence services such as those from China, Russia, Iran or North Korea. The capture and exchange of corporate confidential information is a lucrative business, so guard your files.

6. The Cuban government’s payment records and credit are poor. This means your majority business partner essentially has bad credit, and could present challenges for you when raising capital or seeking contracts. However, it could also move you to the front of the line when dealing with countries that have been historically friendly to Cuba.

All this being said, Thompson says he isn’t trying to talk anyone out of Cuba.

“There are a lot more difficult places in this world to do business in. And there are a lot of companies making money in environments that are more difficult. So don’t be discouraged. Don’t be dissuaded,” he said. “It’s just, knowing about the pieces of the puzzle ahead of time will be very important to operating down there with as few challenges as possible.”