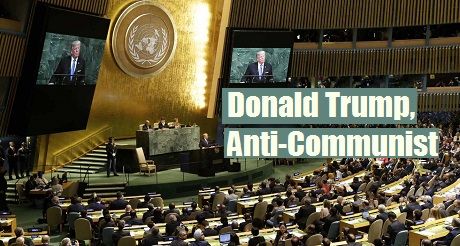 Donald Trump made “America First” the centerpiece of his election campaign, and many thought this would mean a domestically focused doctrine of protectionism and withdrawal from world politics. But the president has unexpectedly come to embrace a core element of the international role “leader of the free world.”

He is naming and confronting the human rights abuses of single-party dictatorships. In a manner not seen since Ronald Reagan, he is attacking their flawed claim of justice—Marxism—by which they deem to rule millions against their will. America’s national interests properly understood have always encompassed the most sweeping and consequential human rights effort in history—mostly by confronting the ideology and actions of tyrannical governments.

Trump’s “America First” foreign policy doctrine is in stark contrast to what Jeane Kirkpatrick called the “blame America first” mindset that dominated universities and the foreign policy establishment when she was Reagan’s ambassador to the United Nations. When addressing the “blame America first” crowd, Kirkpatrick would say: “Americans need to face the truth about themselves…no matter how pleasant it is.” She meant that, despite our obvious imperfections and sins, America has established and maintained a system that has delivered more freedom, opportunity, and prosperity for more people than any other in history. The entire concept that people have rights, by virtue of being human, and that governments must respect them was first enshrined in the U.S. Constitution, and now half the world accepts it as true. But half the world does not.

Appreciating this reality often requires drawing contrasts between our free society and the oppressive governments around the world that work against U.S. national interests and undermine the values of freedom and human dignity. This is what President Trump did in his first address to the United Nations General Assembly. It was comparable to the best speeches delivered by the ultimate Cold Warriors: Harry Truman, John F. Kennedy, and Ronald Reagan. “America,” Trump asserted, “stands with every person living under a brutal regime. Our respect for sovereignty is also a call for action. All people deserve a government that cares for their safety, their interests, and their well-being, including their prosperity.”

This commitment is now an established trend for the administration. Visiting Warsaw in July, Trump gave a stirring speech in Krasiński Square to reassure millions of people living in former “captive nations”—a Cold War-era phrase written into U.S. law by President Eisenhower in 1959—that America would seek to protect their essential personal sovereignty. “Above all,” Trump said, “we value the dignity of every human life, protect the rights of every person, and share the hope of every soul to live in freedom. That is who we are. Those are the priceless ties that bind us together as nations, as allies, and as a civilization.”

The rhetoric is followed up with action. The Trump administration achieved the release of American student Otto Warmbier from North Korea and the president blamed Kim Jong-un for Otto’s tragic death. He has also been scathing in his judgment of Pyongyang’s totalitarian abuses. “No one,” he assured his audience at the U.N. last month, “has shown more contempt for other nations and for the well-being of their own people than the depraved regime in North Korea.” In September, he signed executive orders banning North Korean travel to the U.S. and banning the United States from doing business with financial institutions that also do business with Kim’s regime. Responding to U.S. pressure, even the People’s Republic of China voted along with all other members of the Security Council in unanimous 15-0 resolutions to adopt sanctions against North Korea. Further responding to American pressure, the Bank of China agreed to stop doing business with North Korean firms.

Continuing to confront China, the administration sought the release of Nobel laureate Liu Xiaobo, but he died under house arrest shortly after being granted medical parole by Chinese authorities, following years of imprisonment where he was denied medical treatment. He became only the second Nobel laureate to die in state custody, the first being Carl von Ossietzky, who died in Nazi custody in 1938. Xiaobo’s wife, Liu Xia, remains under house arrest in China and the U.S. should seek her release.

In June, Trump unveiled new restrictions on travel to and business with Cuba, to protest the continued abuses of pro-democracy dissidents by the regime they are protesting. Recently, his administration has even threatened to shut down the U.S. Embassy in Havana—reopened during the Obama administration—due to the mysterious ailments affecting embassy staff after what appear to be sonic attacks by Raúl Castro’s government. A new generation of corrupt and amoral apparatchiks are waiting in the wings to take over once Raúl steps down in 2018, including his son, Alejandro. It is vital for U.S. interests that we not sit idle while a communist dictatorship 90 miles off our shores transfers power to a new crop of dictatorial rulers.

In late August, Trump signed an executive order that imposed new sanctions on Venezuela to prevent Nicolás Maduro from deepening the humanitarian disaster he and his predecessor, Hugo Chávez, have orchestrated. The two successive socialist dictators have pushed the formerly prosperous Latin American country to the brink of collapse, jailing and murdering democracy activists, and wrecking the economy with centralized economic policies, forcing Venezuelans to hunt cats and dogs for food.

As for Russia, Trump has approved fresh sanctions, sold pivotal defense technology to Eastern European allies, and called upon Vladimir Putin “to cease its destabilizing activities in Ukraine and elsewhere, and its support for hostile regimes—including Syria and Iran—and to instead join the community of responsible nations in our fight against common enemies and in defense of civilization itself.”

Crucially, President Trump has not limited his condemnation to dictators’ behavior, but has condemned the collectivist ideology that justifies their actions. “From the Soviet Union to Cuba to Venezuela,” the president stressed at the United Nations, “wherever true socialism or communism has been adopted, it has delivered anguish and devastation and failure.” Unlike too many members of our country’s “intellectual” class, he knows that the destitution in Marxist regimes, in this case Venezuela, stems not from the fact “that socialism has been poorly implemented, but that socialism has been faithfully implemented.” He grasps that the ideologies of socialism and communism are bound to lead to misery whenever and wherever they are tried because their precepts are fundamentally contrary to human nature and therefore hostile to human flourishing.

The liberal anti-communist Harry Truman believed “the basic source of our strength as a nation is spiritual. We believe in the dignity of man.” Words matter. And when words are accompanied by actions, great change is possible, as the triumph of liberty and the 1989 collapse of communism in Europe demonstrated. Of course, there is still much to be achieved. 2016 marked the 11th consecutive year of decline in global freedom while 2017 marks 100 years since the Bolshevik Revolution. Today, one-fifth of the world’s population still lives under single-party communist regimes. But fortunately, it seems we have political leadership that understands the true nature of these regimes, that they represent real threats to peace and freedom, and that they must be confronted boldly and with resolve.

Marion Smith is the executive director of the Victims of Communism Memorial Foundation, a nonprofit educational and human rights organization.