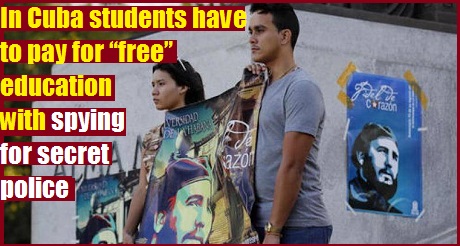 One of the most misunderstood myths about the Castro’s regime is right for free education guaranteed by the state. Although it sounds attractive it would be an act of self-deception to believe that the illegitimate totalitarian state offers any “rights” to its citizens.

On April 12th, 2017 the Central University of Las Villas decided to expel Karla María Pérez, even though she had obtained the only place of journalism offered to her native province. Karla entered the university thanks to her outstanding marks. She was a student of excellence, but she did not sympathise with Marxism.

That poor 18-year-old girl had found an affinity in the ideas of the dissident organisationSomos+. This movement of peaceful opposition is led by young Eliécer Ávila, who was also a brilliant student and dared to call into question the system from a leadership position.

After Karla refused to be recruited as an informant of the State Security, which is the regime’s body responsible for repression of political activists, the FEU conducted a poll to determine whether she should be expelled from the university. The vote yielded the result of 8 out of 14 in favour of the expulsion. Karla was then expelled, despite her high academic achievements. The young student will attempt to exhaust all possible appeal options, but the prospects are not hopeful for her.

Many students and teachers have been expelled from universities because the Cuban educational system attaches greater importance to ideology than to the academic knowledge. Proponents of the “Revolution”, or those who seem to accept it, are enjoying free education. But those who do not sympathise with what is, in reality, a cruel military dictatorship are being denied that right.

Programming in Marxism from childhood

The alignment of the Castro regime with Marxism led to the political indoctrination that begins in the early years of childhood in Cuba. The children’s day-care centers were founded as a Castroist version of kindergartens. The membership in the “pioneer” movement, which is a child and and adolescent adaptation of Communist youth, is obligatory for the students of the primary and secondary schools.

To leave no room for doubt about the indoctrination of pioneers, the motto they must daily recite is: “Pioneers, for Communism, we will be like Che!” For those who are still unfamiliar with facts, Che is no other than the bloodthirsty Argentinean guerrilla Ernesto Guevara, who shot thousands of Cubans in La Cabaña fortress in 1959, without judicial trial or after expedited and rigged trials. Almost all children, with rare exceptions, must become pioneers.

At upper secondary level, many students are encouraged to join Cuba’s Communist Youth (UJC), which is the prelude to Cuba’s Communist Party. The membership at the UJC is taken into account, when it comes to being admitted to Cuban universities.

The government determines what studies and how many places are offered in university classrooms, in accordance with the centralised Marxist planning system. Consequently, a student might not study what he or she wants, having to make do with something else.

In Cuba, there are many professionals, who specialise in the most diverse non-professional activities. There are also technical schools, in which I will not go deeper so as not to make this review interminable.

The university students must automatically join the Federation of University Students (FEU), one of the so-called “mass organisations” that make up the society’s totalitarian control system. Here comes the Fidel Castro’s phrase mentioned above: “within the Revolution, everything; against the Revolution, nothing”. Although, in theory, every student has the right to study at the university, in practice only those who remain, or appear to be, faithful to the Marxist ideology are admitted to universities. If a student has ideas that do not subscribe to the “Revolution”, he or she may be expelled from college and will have no other place to study.

After Castro’s revolution triumphed in 1959, there were numerous private schools at all levels of education in Cuba. Some were very good but others not so. As in any underdeveloped country, the public school system had its shortcomings, especially in the remotest areas of the country and the poorest neighbourhoods of large cities.

In theory, everyone has the right to study at the university, in practice only those who remain, or appear to be, loyal to the Marxist ideology are admitted.

Before Castro occupied Cuba, there was a public education system that guaranteed free and compulsory primary education. However, resources were not available to cover the entire country and there were children with no access to school. The figures vary depending on the sources, but it was said that half a million children — about 7.7% of the Island’s population — were not educated at all, whilst thousands of teachers were unemployed.

In 1959, Castro’s government implemented a nationwide project to build new classrooms, reconverting former military barracks. It also created a contingent of 3,000 volunteer teachers, who were sent to remote areas of the country.

In 1961, a national literacy campaign was launched. Thousands of people, especially students, organised in the so-called Conrado Benítez Brigades, were sent around the country to teach reading and writing. According to the government statistics 985,000 people benefited from this campaign. However, the objective of this operation was two-fold: the alphabetizing of people was accompanied by the indoctrination in Marxism and the cult of Fidel Castro’s personality.

At the beginning of 1961, the government decreed the expropriation of private schools,and on June 6 a Law of Nationalisation of Education was promulgated. This law served as a legal basis for the Castro regime to confiscate all of the country’s private schools, many of them religious, and take full control over education. Many religious teachers were arrested and later expelled from the country. From June to September 1961, Cuba was purged out of virtually all of religious educators and priests.

In 1961, Fidel Castro openly made his revolution a Marxist, which he had denied since his rise to power. On April 16 of 1961, on the eve of the Bay of Pigs invasion by a brigade of anti-Castro Cubans in exile, Castro boasted of having made a Socialist revolution under the noses of North-Americans. On June 30th, he expressed a phrase that has marked Cuba’s life ever since: “Within the Revolution, everything; against the Revolution, nothing”. Finally, on December 1st, 1961, Castro accepted that he was Marxist-Leninist and said he would be so until his last day in life.

Jorge Ros – an engineer, and political analyst. He was born in Cuba and left his country in his teenage years. He is an author of numerous articles on Cuba.